Our specialist conspiracy to defraud solicitors will be on-hand to discuss your situation in more detail and offer advice.

What is conspiracy to defraud?

In all conspiracy cases, the criminal act is the agreeing and planning of the crime, not the crime itself. It is governed by a complex area of law that must be navigated by an experienced criminal conspiracy solicitor, such as one of our criminal defence lawyers. Here at Draycott Browne, we have experience in mounting successful defences against allegations of conspiracy to defraud.

What laws could I be charged with breaking?

There are two types of conspiracy to defraud laws, a common law, and a statutory law. In practice, there is very little difference between the two. A common law is one which is not based on written law; rather, it is based on centuries of historic court tradition. Statutory laws, on the other hand, are written laws that have been passed by Parliament.

Today, statutory conspiracy laws of all natures are governed by Section 1 of the Criminal Law Act of 1977, a complex area of criminal law that should always be navigated with the assistance of a skilled criminal lawyer. When the Act was published, most common-law offences were abolished, but the common law offence of conspiracy to defraud was maintained.

Regardless of which law you are accused of breaking, the case made against you will be serious in nature. All criminal conspiracy offences have to be heard before a jury in a Crown Court, which means your case will be taken to court in the event that you are charged. To give you the best chance of securing a favourable outcome, you will need the help, advice and support of a quality defence team, one that is experienced in conspiracy to defraud cases and skilled enough to represent you.

Can you only defraud major companies?

When people envision conspiracy to defraud cases, they often imagine highly sophisticated criminal operations involving multi-million pound companies, but this is not always the case. If someone has an asset, no matter how big or small, and two or more people conspire to defraud that person of that asset, then a conspiracy to defraud offence has been committed. (Again, note the emphasis here on 'conspire' and 'plan'; the deception does not have to have been carried out in order for a charge of conspiracy to be levied. All that is required is proof that the party planned to behave dishonestly and sought to defraud someone else).

In case law, the offence has been defined as:

How is a conspiracy plan proven?

In all criminal conspiracy cases, the onus is on the prosecution to prove that the accused had knowledge of the conspiracy and had willingly entered into an agreement to commit fraud. They also have to prove that the defendant behaved dishonestly, and that the target would have suffered financial loss if the plan had gone ahead.

The prosecution team will seek to acquire all evidence related to the case, including computer records, paperwork, mobile phone records, and witness testimonies. They are required to obtain evidence that could be used to prove an agreement had been made.

Evidence could also come from the person who believed they were about to be defrauded or, in the case of businesses, whistle-blowers, auditors, accountants or people with responsibility.

What should I do if I am arrested on suspicion of conspiracy to defraud?

If you are arrested, it is imperative that you do not consent to being interviewed by the police until you have engaged the service of a qualified lawyer who is trained in the area of law concerned with conspiracy to defraud cases. You will be told that you 'do not have to say anything', and that 'anything you do say will be taken in evidence.'. During interviews, police create pressurised situations that are difficult to navigate, and which often cause people to inadvertently incriminate themselves; take advantage of your right to remain silent, and do so until your lawyer arrives.

All people in the UK have the right to free legal aid during their time in the police station and it is important that you do not waive your right and agree to an unsupported interview. You will be able to request the services of either the duty solicitor, or a specialised lawyer, such as one of our team.

The police will most likely ask to take your phone and search it for evidence of the alleged crime, but you do not have to give your phone to them immediately. If you are asked to give your PIN to open your phone, enact your right to remain silent. Our lawyers will be able to offer help and advice on how you should handle your personal devices in the event of an arrest.

What else will my solicitor do?

As soon as you engage a solicitor from Draycott Browne, we will work with you to investigate the crime you are being accused of and help you to mount a defence.

We will work to undermine the evidence held by the defence by questioning how it was collected, whether it is legally admissible (in other words, can be heard in court), and whether or not it actually serves to prove your guilt. With conspiracy to defraud cases (which always hinge on proving that a dishonest agreement has been made between two people), your lawyer will examine the evidence that the prosecution is using to 'prove' that such an event occurred and, wherever possible, endeavour to show that the communication did not amount to a dishonest agreement.

Ultimately, our solicitors will use their experience of the law to build a defence case which is more compelling, more favourable, and more persuasive than that presented by the prosecution.

The sooner you engage the services of one of our team after your arrest, the better; the more time we have to work on your defence, the tighter it will be, and the higher the likelihood of you receiving a favourable outcome from the judge.

What is the sentence?

If you are charged with conspiracy to defraud, your case will be heard at the Crown Court. The maximum sentence that could be given by the judge is 10 years, but sentence lengths have varied considerably in recent cases, making it difficult to predict what a typical sentence would be for a conspiracy to defraud offence. Given the seriousness of the case being heard at the Crown Court and the potential to receive a long and punitive prison sentence, it is imperative that the help of a dedicated defence lawyer is engaged quickly to build a secure and persuasive defence.

A mitigating factor is a piece of information given to the court that could reduce the sentence given in the event of a guilty verdict. Your solicitor will work with you to prepare a mitigating circumstances plan. To do this, they will consider:

If you are charged, or believe you will be charged with a conspiracy to defraud offence, contact our experienced team here at Draycott Browne to make sure you mount the strongest defence possible.

By entrusting your case to us, you can be assured that you will have a team of highly experienced and tenacious legal specialists who have a thorough and comprehensive knowledge of this area of law.

As one of the UK's leading Criminal Defence Law Firms, we are highly regarded nationally across the legal profession and noted for consistently delivering positive results for our clients.

Our expert Conspiracy to Defraud Solicitors regularly act for clients in Manchester, Preston, Blackpool, Liverpool, Leeds, Nottingham, Birmingham, and London. As recognised Criminal Lawyers we can represent you wherever you live in England and Wales.

Our legal team is available 24 hours a day, 7 days a week. If you or somebody you know has been arrested and needs expert legal representation, contact Draycott Browne today. 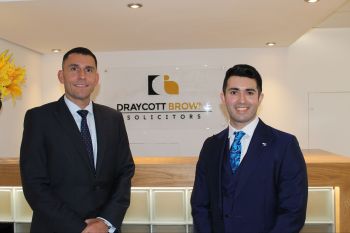